If you are allowed out you will have noticed homemade rainbows painted or stuck inside people’s front windows. Kids and adults alike have been making them to share brightness and cheer. The idea being that those walking by can spot them on route giving a feeling of solidarity during this difficult time.

This little project will help you make a number of rainbows in one go. You can then send to friends and family in isolation and to brighten your own window. 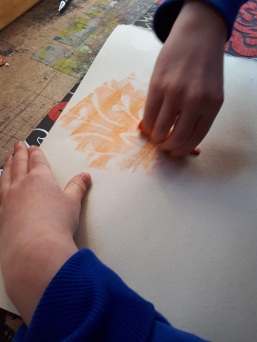 Whispers in the Grass

Draw rain into this deep valley,

Part of the BM125 project involved taking ideas about the Collections back into the landscapes a lot of those collections came from. In July, as one of our public events, Creeping Toad teamed up with Borderland Voices to host a poetry and art day at the Dove Valley Centre in the Upper Dove Valley fitting the day into the Buxton Fringe Festival

26 people joined us for a day of walking and wandering, scribbling ideas, sharing words, creating pictures and eating cake. We didn’t tie the day to any particular artefacts but drew upon the historic landscapes of the Moorlands and poems unfolded about the flowers we met, the drystone walls and the agricultural history of the area. The clear night-time skies over the dales inspired solar system pictures while other people focussed in to capture the flowers of traditional haymeadows.

Poems from the day are being posted on the Creeping Toad blog and some of the shorter pieces, especially the riddles, will be logged onto the Wonders of the Peak app to tempt people out walking to create their own

Have a go yourself?

A quick haiku activity: go outside and sit down on the ground if you can. There, a) look at the sky above, b) touch the ground below, c) reflect on how these sensations make you feel. Turn those three thoughts into 3 lines. You might use the syllable convention ( 5 syllables, 7 then 5 again) but you don’t have to! Go for short, clear images and hold onto room to breathe….(Looking up, reaching down are a good pair of sensations, you could use others!)

Whispers in the grass

Thanks to our Whispers poets and artists

The opening poem is by Mary King,

for the others we haven’t got notes of the poets names!

A voice in a field

Celebrating the years that something has been standing stuffed but still growling in a museum may seem a bit odd, but “The Buxton Bear” has been a feature of the Museum since its arrival 30 years ago. When the Museum redesigned its Wonders of the Peak galleries in 2017 there was much debate about “whether the bear should go”.

After all, this is not a local bear (probably a North American Black Bear, maybe a Brown). It isn’t an established part of the Collection – it was brought in to give the museum a bear in a cave as an example of the excitements of life in the Peak District a few thousand years ago (although at the time our bears were probably larger and didn’t growl in trans-Atlantic accents). The Bear, however, is well known, well loved (by some), well loathed (by others) and well dreaded by adults who were growled at when they were (presumably) much younger. The Museum just wouldn’t be the same without The Bear rumbling away in a corner.

So, The Bear stayed.

And this year marks 30 years of growling away in a corner of the Gallery. Over the summer, the Museum staff have been encouraging the Bear into new looks. We have seen a Boating Bear, a Wimbledon Bear, a Holiday bear, a Pride Bear.

The Museum’s regular event artists (including myself), have also been joining in with assorted Bearday activities. There have been bear masks, bear finger puppets, drawing big bears, making cards of small bears, bear heads. On Sunday just gone, we had a Teddy Bear’s Picnic out on the Slopes in front of the Town Hall. Here, between sandwiches and running around, we made bear badges and bear bunting. There were

crowns for teddy bears (and cuddly zebras and pigs). There were Bearday Cards (sorry, Bear, they all went home with the children who made them!) and a general sense of ursine cheerfulness

So if you are in Buxton, please do drop into the Museum and say hallo to our Bear. She (or he? Not quite sure) is definitely one of the family.

and thanks to all all our Bear event participants and to Richard Johnson for the original bear line drawings we used for the badges!

*the bear stole a honey diamond from the snail who owned and guarded it….

Whispers in the Grass

a day of words and art

write a poem, draw a picture, shape a story from a twig,

a feather and a leaf….bring a picnic and relax

A breeze blows through the hay, a bumblebee buzzes, sun warms the old meadows of the Dove Valley and we all settle into an ease of stories and poems. Join the Creeping Toad and Borderland Voices team for a day of inspiration from the fields and wide skies of the valley

This event is planned as a day for casual creativity. Our artists will support you with ideas and materials and you can do as much or as little as you like. You can just take some time to simply enjoy the beauty of the Upper Dove Valley, chat to new friends or old mates and (maybe? hopefully!) watch the ravens tumbling in the sky over Pilsbury castle

Whispers is a free event: no booking or tickets are needed, just drop by and join in. If you would like to check anything out, contact Gordon on creepingtoad@btinternet.com

Dove Valley Centre: follow the link for directions to the Centre. When you arrive at Under Whitle, you can drive down the track to the Centre (right at the end of the track) but you are recommended to park at the top of the hill and walk, saunter or wander down the hill to the Centre and enjoy the views as you drop into the deep valley

This gentle event is outside Buxton so give yourself a day off from Festival stuff and come out into the Moorlands.

Making carnival masks and hats inspired by our very own scimitar-tooth cats,

Once upon a time and not so long ago there were wolves in the Peak District hills, wild boars in the woods and beavers in the rivers. Once there were wild ponies here, and cave lions, reindeer and bears. There were scimitar-toothed cats and straight-tusked elephants.

Before that, long and longer ago there were strange sharks swimming in ancient limestone seas.

What wonderful animal would you celebrate? 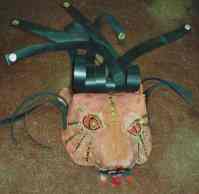 Join us at the Museum to make animal masks and hats to wear in Buxton Carnival – or just to wear and enjoy and relish the animals that lived here once (or, for unicorns, maybe “should have lived here once”).

Celebrate the ancient animals of the Peaks and join Two Left Hands in the Buxton Carnival Parade. A BM125 workshop as part of the celebrations for the Museum’s 125th anniversary

This event is free, no booking or tickets needed. Children under 7 should bring a grown-up with them and you need to allow 45 minutes to make an animal hat