Archivist Ian Gregory examines an image of what has to be one of the most peculiar parenting aids ever imagined:

One of the many photographs in Buxton Museum & Art Gallery shows a rather unusual pram. It comes from Chatsworth and was made for the Dukes of Devonshire. Our photo was taken in 1930, but the pram looks older still. It was designed by William Kent in 1733. The pram is decorated with two snakes that writhe down from its hood to its wheels. The first impression is that it must’ve triggered nightmares in any babies travelling in it. 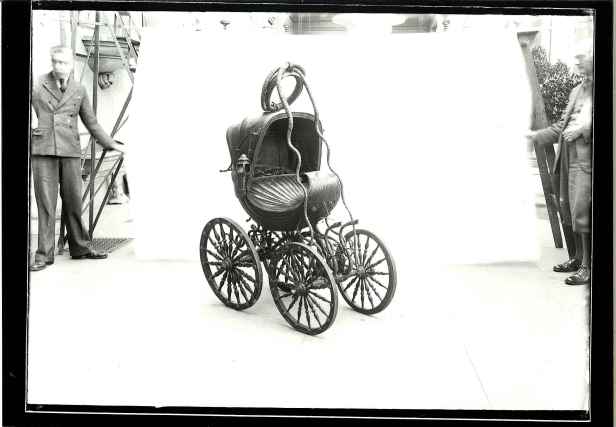 The reason for this decoration is that a snake is part of the Devonshire family crest. First impressions can mislead; when the pram was in use, those snakes didn’t stand over its little occupant. They would’ve stretched out in front and acted as a harness for a goat, dog or miniature horse that pulled the pram (or stroller, as it has been referred to). This would’ve been less oppressive for any child inside.

Why was there a snake on the family crest? Today the creatures are objects of revulsion for many people. “You snake in the grass” is an insult implying treachery. Snakebites are a frequent cause of death in the tropics. According to the Old Testament it was a snake that tempted Eve in the Garden of Eden.

There is another side to representation of snakes. As they grow, they shed a layer of old skin to reveal a new one underneath. This ability resulted in snakes becoming, at least in some cultures, symbols of renewal or immortality. Apex predators can become symbols of strength and courage as well as causes of terror; the lion is one obvious example. In Greek mythology, Asclepius the god of medicine, carried a staff with a snake entwined around it. Hermes, messenger of the gods, owned a staff with two serpents entwined on it.

Renaissance Baroque aristocrats were familiar with Classical history and mythology. They embarked on the Grand Tour to Italy and Greece They had country houses built in the Classical style, then filled them with ancient sculptures. Bearing this in mind, perhaps it isn’t so odd that they worked a serpent into the emblem of one of their greatest families.