Back in March, during British Science Week, as part of the ongoing BM125 celebration, artist Will Hurt set up in the Wonders of the Peak gallery. 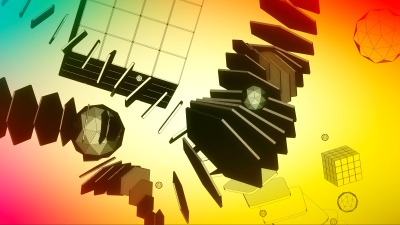 he invited visitors to play a large interactive screen, with both hands, and as many fingers as you might like, to create crystalline patterns. Colours and shaped rippled across the screen in response to our action: pulsing, fragmenting, growing, changing. Crystallisation at an accelerated rate. 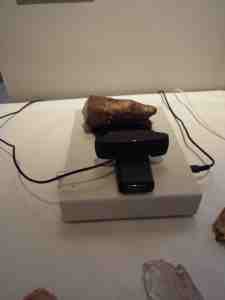 There was also a small turntable. Here we could choose a rock, a polished stone, the sharp shards of a crystal and, rotating gently, it would be scanned and the scanned profile turned into sounds. They were strange sounds. Not sure what any of us were expecting but these sounded like slowed down voices, rumbling, grumbled mutterings, rising and falling with the shapes of their scans. A fascinating experience that had us rummaging around for new shapes to scan and wanting a second turntable to see if we could play with those stone voices and, building an exchange, listen to the ancient, slow conversations of stones

At the end of the week, musician Oliver Payne joined Will and gathering the assorted “conversations” of the week, he improvised a performance, the music of stones.

This was an intriguing piece of work, both Will and Oliver’s. I have a background in geology and am used to handling rocks and finding ways of telling their long slow stories through poetry and dance. There were lovely firsts here for me. The speed and sheer immediate excitement of Will’s Mineral Abstraction screen was a delight. The sounds from the turntable work were inspiring and Oliver’s final piece was great fun: I could see dance moves and strange shadow puppet unfoldings to it. It also spoke to me of darkness, of pebbles knocking together, of the rocks of Poole’s Cavern settling to rest after a long day of Being Looked At…..or just the atmosphere of the cave when the lights were switched off 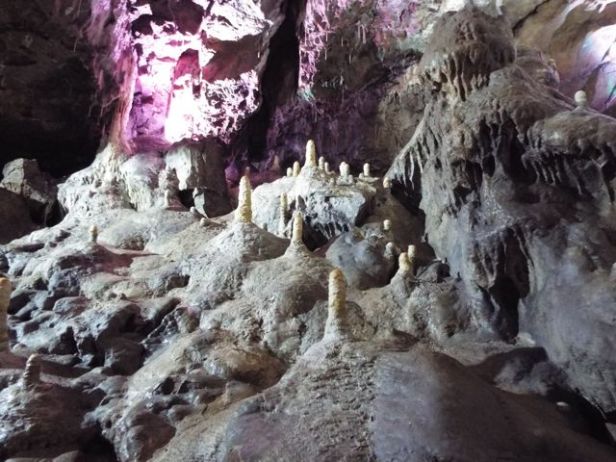 BM125: Buxton Museum and Art Gallery is 125 this year and to mark that anniversary, the BM125 project is bringing together experienced with new and emerging artists with 12 months of artistic initiatives. Look out for